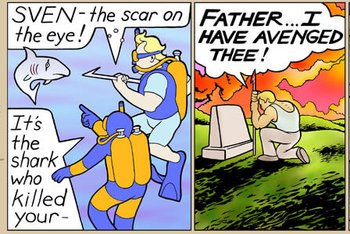 "Hello. My name is Inigo Montoya. You killed my father. Prepare to die."
— Inigo Montoya, The Princess Bride. (See the Quotes page for the whole story.)
Advertisement:

When one of the villains kills the parent (usually father) or even the entire family of one of the heroes, it'll be that hero who kills that villain in question, even if this isn't an explicit act of vengeance. Occasionally, it's the mother, but this is rarer, and usually crops up in cases where the father is unaccounted for. Sometimes the villain killed both parents, but the mother will barely get a mention. If even more Angst is needed, then expect a case of Luke, I Am Your Father. Mothers more frequently appear in Turn Out Like His Father, because they are afraid if the child tries to get Revenge, he will only die, too; the success rate in preventing this trope is very low.

This is a Sub-Trope of It's Personal and a Super-Trope to Vengeful Widow, and forms a central part of many Cycles Of Revenge. Compare Cynicism Catalyst, The Lost Lenore, and Dead Partner. See also Best Served Cold and Roaring Rampage of Revenge. This can overlap with Familial Foe.