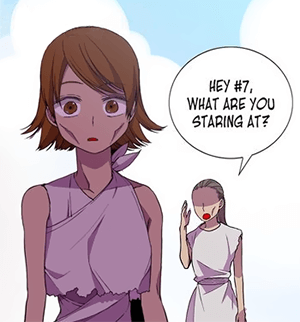 Number Two: You are Number Six.
Prisoner: I am not a number, I am a free man!
— The Prisoner (1967)
Advertisement:

When a character has a number as a name, i.e. a numeronym

Usually this carries dehumanizing implications. This can be for (at least) two overlapping reasons:

For some reason, these implications are usually somewhat lessened when the number in question is "zero". They also don't necessarily apply to spy or superhero Code Names that are numbers (like 007), unless they become part of a Secret Identity Identity. Having a low number (i.e. in the single digits) as a name is generally considered less humiliating than a large one. And Heaven help you if your name is 4, 13, 108, 666, or a combination of them.

Science Fiction stories, especially dystopias, are likely to use this trope to some extent. It's also common for prisoners to have serial numbers instead of names.

Note that several languages have numeronyms (Japanese and Latin being the most likely to be encountered). In this case, the kids will be named in order of birth: literally, "Primus", "Secundus", "Tertius", etc.

Bizarrely, this can actually also serve to humanize beings that have never had separate identities before. If you have a race of robots or drones that become sentient, they may adopt their numbers as their actual names (à la Artoo Deetoo and See Threepio).

Not to be confused with I Am Number Four or "We Are Number One".

Alternative Title(s): Numeronym, Name As A Number, Number For A Name