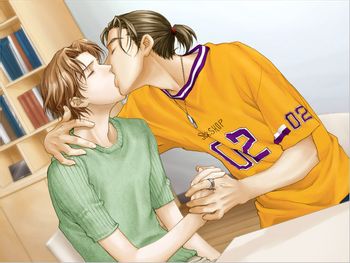 Why? Because Guy on Guy Is Hot and that's all there is to it.
Advertisement:

Yaoi, also known in Japan as "Boys' Love", is a subgenre of Shoujo focusing on male homosexuality, for a predominantly female audience. Typical pairings have the seme and the uke roles, which signify the characters' roles during sex, penetrative and receptive respectively, and often times even dictate their personalities and masculinity relative to each other. The word itself comes from "yamanashi, ochinashi, iminashi" (or "no climax, no ending, no meaning"), though fans have also come up with another memetic acronym: "Yamete! Oshiri ga itai!" ("Stop it! My ass hurts!"). However, the term is outdated in Japan and the more neutral term "Boys' Love" is more often used to describe the genre, which also refers to any gay content in general.

With its roots in the chinbi (aesthetic) novels of the 1970s and doujinshi culture, commercial Boy's Love has developed drastically in terms of style and content. While some stereotypes and cliches remain, such as characters denying homosexuality, or lack of realism with regard to gay culture, and the prevalence of rape fantasy as a common theme, modern BL often grapples with subjects like homophobia and gay identity, and has gained popularity among gay men as a result. Furthermore, transmasculine fans may relate strongly to men being assigned feminine bodies and female social roles.

No relation to the Yowie, an Australian cryptid similar to the Bigfoot, Sasquatch, and Yeti.

Use of BL manga/anime itself as a trope: