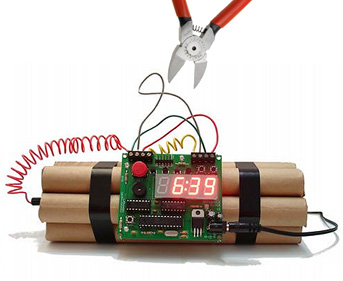 "There's no green wire?!"
"If I build a bomb, I will simply remember which wire to cut if it has to be deactivated and make every wire red."
— Evil Overlord List Cellblock A, 'Rule 136'

In fiction-land, disarming just about any bomb is a matter of cutting the right wires in the right order — usually each wire will be given a distinctive color, and an assistant will read from a manual: "Clip the red wire, then the blue wire, then the yellow wire..." The implication is generally that if the wrong wire is cut, the bomb will explode instantly, killing the person disarming it and everyone else in the blast radius. Combines Race Against the Clock with the need to make absolutely sure you're making the right decision for dramatic tension. Of course it's never as easy as just following the manual — generally some kind of subversion is used to heighten tension.

At no point is there a plausible explanation as to why a homemade bomb should conform to any color-code standard at all, especially since the designer obviously never intended for it to be disarmed in the first place - in fact, having multiple colored wires in the first place is puzzling since you'd expect the wires to come from the same spool, with the same color. Maybe they wanted to make sure they were assembling it correctly?

Naturally, a bomb intended for air-dropping (or a missile warhead) really shouldn't have any trick wires to start with. Still, it makes you wish there were an Override Command.

Example of a Dead Horse Trope, partly since in real life the electronics of a bomb are both simpler and more fragile than Hollywood would have you believe. Mostly, however, it's because Time Bombs simply aren't used anymore, at least not very much. Both proximity triggers and remote detonation are more likely to get the indented target, as well as blow up anyone who gets close enough to disarm them. A Time Bomb still has the advantage of both letting you get away without the risk of a proximity trigger being set off by you or the need to hang around close enough to perform the manual detonation, but most simply opt for a work around instead of a timer. The Wire Dilemma has a minor Sub-Trope in the Wrong Wire. See also Bomb Disposal, Operation Game of Doom, Cut the Fuse, and Relocating the Explosion.