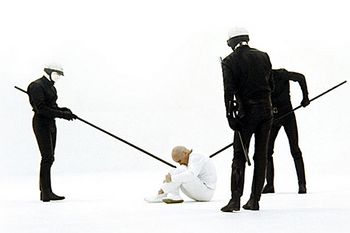 No, the background is not transparent, tropers.note If the wiki's background is dark and you still made that mistake, your browser's "night vision" mode is most likely acting up and colour-inverting the image.
"I'll wait in this place where the sun never shines
Wait in this place where the shadows run from themselves"
— Cream, "White Room"
Advertisement:

A featureless white room. Think of being inside a gigantic, well-lit ping-pong ball. So featureless, in fact, that you can't even tell where the walls, floor, and ceiling end—they all blend seamlessly together under the uniform light, so the chamber looks more like a white void than a room. Sometimes, the only indication that it's not a void is the fact that the characters have something solid to stand on.

As literal white voids represent some "other realm"—usually a result of a dream or crossing over to another universe—physical rooms that replicate this visual effect will have the same connotations. They make excellent cells for imprisonment or interrogation—the absence of visible exits (or any sign that the outside world exists at all) implies no possibility of escape. Or, the white can represent sterility, making these rooms suitable for otherworldly hospitalization. Or, it can represent the limitless possibilities of a blank canvas, so this room could be a currently-inactive holosimulator, or some other place where literally anything can happen.

Occasionally, there are a few pieces of furniture (color is optional) in the room for the characters to sit down and have a discussion. May be an extreme form of Ascetic Aesthetic. When this effect is produced unintentionally by poor description, it is a Featureless Plane of Disembodied Dialogue.

Compare Blank White Void, for literal dimensions of white. Often a sign of the Lazy Artist in Sequential Art when the background is missing. The diffused high-key light often makes this the opposite of Chiaroscuro. See also Misery Lit for when a book presents the white void room on its cover to represent death. May overlap with You Wake Up in a Room.