Where Everybody Knows Your Flame
aka: Gay Bar 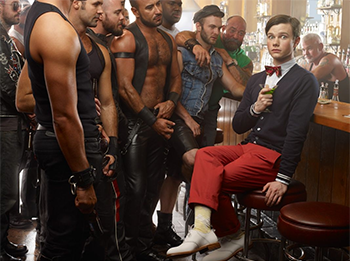 They're just concerned because they don't approve of underage drinking.
"Now tell me do ya
Do ya have any money
I wanna spend all your money
At the gay bar, gay bar, gay bar."
— Electric Six, "Gay Bar"
Advertisement:

In real life, the average gay bar is simply a pub where most of the regular patrons are of gay, lesbian, bisexual, or transgender/genderqueer persuasion. That's really all there is to it. Mostly they are just places where LGBT+ people socialize, dance, have a few beers, play pool, watch a show, etc. Sometimes people chat up/pick up a new partner in these places just as straight people do in straight bars and pubs.

In the media, this is simply not the case, especially when the queer community is treated as the Subculture of the Week. Any bar or club catering to LGBT+ people will be portrayed as far wilder than its straight counterpart. People will order drinks dressed in fetish gear such as studded leather, gimp masks or tight rubber. Drag Queens will strut about like they run the place (and one probably does), and loud Techno/synth music will blast from the speakers. The fact that there are different clubs for different gay subcultures in Real Life isn't always realized.

Lesbians are, depending on who is to be believed, either less scene-obsessed or less willing to support their spaces than gay men, so it's not unusual for a city to have one or two lesbian bars while having a dozen bars for gay men, each catering to a different crowd. Still, lesbian bars will be filled entirely with broad-shouldered, cigar chomping, work-booted diesel dykes or young, nubile Lipstick Lesbians. And the two shall never meet, even if it's the only dyke bar in town.

As is the Rule of Cool, gay audiences will note that such bars will be larger, sleeker, flashier, wilder, and generally far more interesting than anything they have in their own neck of the woods, unless they live in a big city. In fiction, the one gay bar in Johnstown, Pennsylvania is just as huge and lively as anything in West Hollywood.

Depending on the reaction of the characters, this is a Sub-Trope of either Coolest Club Ever or Bad-Guy Bar. Often used to set up jokes at the patrons' expense. Often, this sort of bar will be used for a Gay Bar Reveal; in this case, it's going to have to be for a parody of the trope because it is near impossible to mistake this sort of club for what it is.