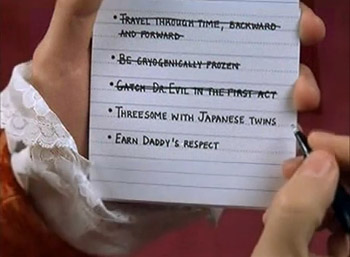 Well, at least he has his priorities in order.
"A father has to be a provider, a teacher, a role model, but most importantly, a distant authority figure who can never be pleased."
— Stephen Colbert, I Am America (And So Can You!)
Advertisement:

Our hero may be a perfectly Nice Guy, respectable, successful, a loving husband, and a good father. But what he really wants is for this one guy to acknowledge this.

Most often, that one guy is his emotionally distant father, though it can also be The Ace, The Mentor, an Aloof Big Brother, or especially that Always Someone Better individual, usually as an old friend of the hero. Almost always a Special Guest, and often a Large Ham as well. When it's a recurring character, usually a controlling parent.

A "Fawlty Towers" Plot will often ensue as our hero tries increasingly more convoluted schemes to convince the "Well Done, Son!" Guy of his worth.

In other genres, this can be a bit more understated, with the "Well Done, Son!" Guy simply giving our hero an approving nod from a distance (or saying, "That'll do, pig"). If the "Well Done, Son!" Guy is a Trickster Mentor or Zen Survivor, they may have a very long and painful road ahead of them to get even that. May be part of an Inadequate Inheritor plot. The Fantasy-Forbidding Father usually inspires this sort of feeling. This dynamic is usually father-son. Mother-daughter and father-daughter are not too unusual, but mother-son is rare (unless it's the Jewish Mother scenario, which is almost always Played for Laughs).

A really unpleasant variation is when the "Well Done, Son!" Guy is already dead, which in most cases means the approval and emotional bonding will never happen. At best, the character may gain some comfort by following his understanding of what the deceased would want if he were alive.

Contrast So Proud of You where the child receives their parent's approval. Also contrast Hates Their Parent where the child wouldn't be bothered with seeking their approval. For the inversion, see "Well Done, Dad!" Guy. This may be caused by Anti-Nepotism.

Dr. Flug's dream shows that really wants Black Hat's approval, but given the kind of boss he is, he's unlikely to get it.

Dr. Flug's dream shows that really wants Black Hat's approval, but given the kind of boss he is, he's unlikely to get it.