Weather Manipulation
aka: Power Of The Storm 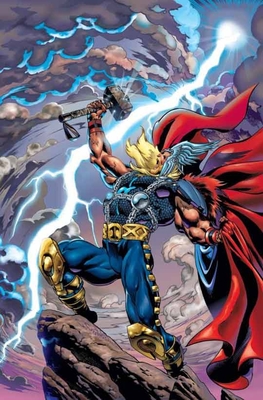 Today's forecast: Cloudy with a chance of divine fury. Bring umbrellas.
"All the power of the storm, from all the world, flows through my veins, and can be summoned by mine hammer at any time, wherever it is. A lightning storm in Japan? Mine. A hurricane off the coast of Barbados? Mine again. A brace of tornadoes in Kansas? Aye... mine. All that might, all that destructive force, mine to command. Channeled and guided through the mystic might of this hammer, guided right at thee!"
— Thor, Captain Marvel (Marvel Comics) vol. 4, #17
Advertisement:

The ability to manipulate the weather. It is a stock superpower.

This is a Combo Platter of Elemental Powers: Blow You Away, Making a Splash, An Ice Person, Shock and Awe and thermal manipulation. Weather manipulation is very versatile. For example, using the wind, some weather manipulators can fly. And, as everyone knows, Lightning Can Do Anything.

Sometimes these powers are used for Painting the Frost on Windows. The difference between Elemental Powers and weather manipulation is that storm manipulation is limited to the elements that make up the weather. Compare with Weather-Control Machine, where you need a dash of phlebotinum to achieve the same ends. Compare Artificial Outdoors Display for when even the weather itself isn't real.

Alternative Title(s): Power Of The Storm