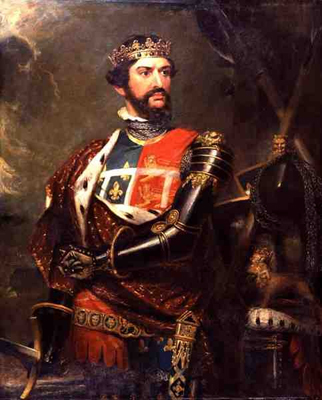 Edward of Woodstock, the Black Prince.
"I am a warrior! The Saiyan prince! VEEGGEETTAAAAAA!"
— Vegeta, Dragon Ball Z
Advertisement:

This is where a member of royalty takes part in battle himself, especially as a commander. This was once quite common, and examples of it can be found from time to time in the present day. It is a favorite of epic and romantic tales and goes back far in the history of literature, back to things like The Iliad. A warrior prince can be a Wise Prince, bravely fighting for his kingdom; he can also be an evil conqueror. While this character always stands a high chance of being a badass it is even more likely in that second case, as the Big Bad exposing himself requires a certain level of badassery.

Very, very common in myth and legend, going back to those Older Than Dirt.

A subtrope of Royals Who Actually Do Something. See also Action Politician, Authority Equals Ass Kicking, and Lady of War.

While in many western cultures only princes would go on the battlefield, (and even then there have been some female examples in history) in other parts of the world princesses were just as likely to fight. In those more strict patriarchies where women aren't seen as warriors they may have to train in secret. This could result in a Pretty Princess Powerhouse. In fiction it may also be the case that Gender Is No Object and only the Royal Blood matters.

In terms of the ranks of Authority Tropes, the tropes that are equal are The Evil Prince, Prince Charming, Prince Charmless, The Wise Prince, and all Princess Tropes.

The next steps down are The Caligula, The Good Chancellor, Standard Royal Court and Decadent Court. The next steps up are The Good King, God Save Us from the Queen!, The High Queen, and The Woman Wearing the Queenly Mask, some of which are still warriors even when they're in charge.

If this Prince takes pride in his heritage, expect him to always use I Am X, Son of Y to introduce himself.