What The Hell, Casting Agency?
aka: WTH Casting 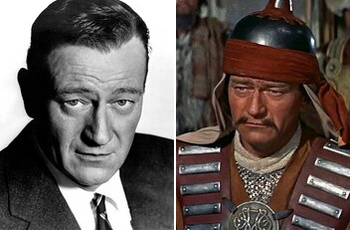 Not to be confused with Money, Dear Boy (though that's often the cause of this); sometimes, the actors involved just did it for the heck of it and not necessarily because they were paid very much or that they're trying to show that they can be versatile and not be in the Typecasting trap; which can be bad for actors. Which makes for a great work but still does nothing to reduce the surreality of their presence in it. Can also occur when an attempt at Stunt Casting comes waaaaay out of left-field. But there are cases where the odd casting actually worked And the Fandom Rejoiced. See also: Black Sheep Hit, a hit song that doesn't sound anything like the band's other songs and Playing Against Type, when an actor or director makes a project outside of their usual character type. See also What The Hell, Costuming Department?, when it's the fashions that are out of place rather than the cast.