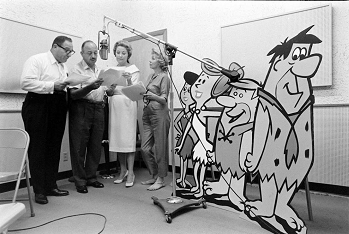 "The difference between doing voiceover work in animation or in real movies — as opposed to video games — is slight. I mean, you know, acting is acting. It's either good acting or it's bad acting."
— Keith David on his role in Mass Effect
Advertisement:

Those voices you hear in Cartoons, Anime, Video Games, Puppet Shows, Radio, and Commercials don't exist in a vacuum. While not quite as famous as regular live-action actors, these folks still get a lot of mention among fans for their distinctive style and/or extensive catalogs.

This index page is meant for actors whose primary career is in voice work, or at least have an extensive history of voiceovers. Don't bother listing live-action actors who also happen to do a rare voiceover.

There is considerable overlap between this list and Names to Know in Anime. See also Puppeteers.