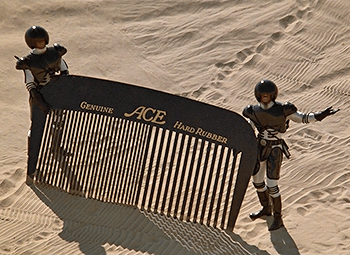 "We were told to comb the desert, so we're combing it!"
"Don't worry, bro, none of this is canon. But this is!" (pulls out an actual cannon)
— Uncle Grandpa, Steven Universe, "Say Uncle"
Advertisement:

B-Roll Rebus is when news and documentaries do this with Stock Footage. Compare Stealth Pun, which is sort of like a Visual Pun without the visuals; of course, sometimes a Visual Pun can be a stealth pun, but you know, they're stealthy about it. A Super-Trope to Metaphoric Metamorphosis (where road signs are literal, not figurative, depictions of what's up ahead) and Rules of the Road (same). Often a Sister Trope of Literal Metaphor.

When creatures, whether individuals or entire species, are designed as living visual puns, see Pun-Based Creature.