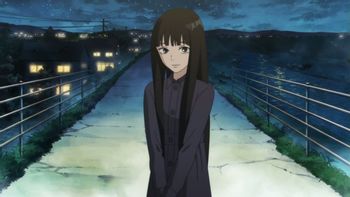 This trope is an Anime/Manga exclusive.
Advertisement:

In some scenes with couples, there will be a static background shot of a school facility (usually a hallway or yard) or any home/urban/park area, with a vanishing point (generally centered), representing the protagonist's point of view. In the foreground there's a medium shot of almost always a female character with a shy or gentle expression. This is known as the "standing image", in which the character can only be seen in the front usually from the head to the waist.

Similar to a standard Dating Sim or Visual Novel screen (as well as many Flash games). This shot is commonly used as a device to imply romantic involvement.

Might or not have the menu options and decorative frames (in which case it's a parody).