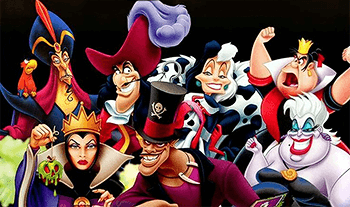 If you wanna see evil tonight at its best
We're the cruelest of people, put us to the test
If you're looking for heinous and iniquitous acts
Ethics cannot contain us, sit back and relax!note Pictured: Back row; Jafar from Aladdin, Captain Hook from Peter Pan, Cruella De Vil from 101 Dalmatians, The Queen of Hearts from Alice in Wonderland. Front row; The Queen from Snow White and the Seven Dwarfs, Dr. Facilier from The Princess and the Frog, Ursula from The Little Mermaid.
Advertisement:
"I'd rather be a canker in a hedge than a rose in his grace, and it better fits my blood to be disdained of all than to fashion a carriage to rob love of any. In this, though I cannot be said to be a flattering honest man, it must not be denied that I am a plain-dealing villain. … If I had a mouth, I would bite; if I had my liberty, I would do my liking. In the meantime, let me be that I am, and seek not to alter me."
— Don John, Much Ado About Nothing

The bad guys. The mad scientists, the cruel executives, the evil witches and wizards, the corrupt politicians, the mortal aspects of pure evil, and, more often than not, the people (or otherwise) that instigate the conflict and the story.

Despite how one is supposed to cheer for The Hero to succeed, there has always been a long standing interest in the villains. Some are renowned for their intelligence and cunning Evil Plan, others are awe-inspiring with simply how evil they can be, and yet others are respected because of their determination. No matter how many times the hero breaks open the door and stops their plans, they're always back at it soon enough, with another dark scheme to further their evil goals. On the other hand, not all villains can achieve that secret admiration.

It is said a hero is only as good as their enemies. Thus, a good story has to have a well-written villain, somebody that earns respect. After all, what is a hero without a villain to challenge them? This

Contrast this index with its antithesis, Heroes. There's also a Wiki