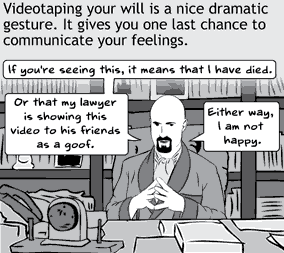 "Homer, if you're watching this, either I'm dead, or you've gone through my stuff.
If I'm dead, this is my video will; if not, please keep away from my stuff."
— Mona's video will, The Simpsons
Advertisement:

A deceased character has elected to leave a parting message in the form of a recording. It typically includes a narration of who gets his or her possessions, and it often starts with a line like, "If you're watching this, it means I'm dead."

There are several ways the trope could play out:

This trope is, as you'd expect, an example of Hollywood Law. Video wills generally aren't valid and cannot be probated; there's no text, and no signature, and nobody ever thinks to write a "real" will and use it as a script if they really want to be dramatic. A quick look at attempts at video wills on YouTube will show you that these things are very rarely structured like a legal document. In fact, the trope is a modern-day extension of a much older trope in which a will's executor will read it out loud, which was necessary in an era when not everyone could read; this trope preserves the drama of a verbal announcement of who gets what.

Then he suffers chest pains and is hospitalised, but it turns out to be gas.

Example of:
The Owl-Knowing One