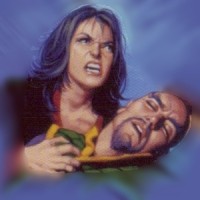 You killed my husband. Prepare to die...
Advertisement:

Western popular culture has long told stories of black widows — women who kill their husbands for money. This trope is something different — a woman driven to kill by the loss of her husband (or significant other or loved one).

This trope is a subtrope of You Killed My Father. A usually evil Distaff Counterpart to the Crusading Widower. Compare Determined Widow, the usually heroic version of this trope.