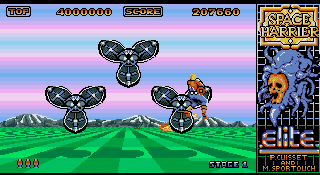 A mostly dead element of video game interface design. In the early days, when processing power was limited, it was not always possible to fill the screen with the action of the game. The main window had to be reduced in size, and something was needed to fill the extra space.

In some cases, the best the programmers could come up with was to place the game logo and an abbreviated set of instructions in the remaining space. This was also common for ports to home systems of games designed for a tall screen.

This may have begun in 1985, when Atari's first four-player game, Gauntlet, featured the game's color-changing logo in the upper right corner of the screen, above the score displays.

Today, this is frequently used in emulators of pocket gaming systems due to the limited resolution of the systems. Or 2D shooters (Shoot 'Em Up) due to how the gameplay mostly optimized for TATE (vertical widescreen).