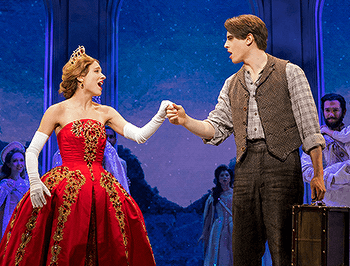 A relationship variant of the Odd Couple and quite often overlaps with Nobody Thinks It Will Work. Also often leads to cases of I Can't Believe a Guy Like You Would Notice Me, either with a severe case of insecurity (like the third type above), or simply the poor guy being constantly feeling lucky and appreciative that someone so rich could fall for him. If it's not just the fact that she comes from money, but that he feels like she's above him, she's a Peerless Love Interest. Compare with All Girls Want Bad Boys, which often follows the same socioeconomic groups (or the inverse, if the girl is The Ingenue and the boy is a Gentleman Snarker or Spoiled Brat). Can overlap with Single Woman Seeks Good Man as it is the guy's personality that wins her heart (as is the case mentioned above). Might also overlap with Star-Crossed Lovers if the pair doesn't end up together for whatever reason.