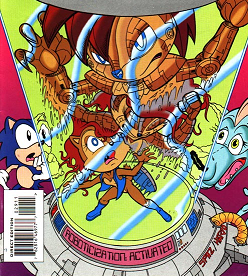 Well, the Furries may be sad about Sally Acorn's fate, but at least the Robosexuals will be happy.
"I never asked for this. They say they saved me, but I'm not sure saved is the right word."
— Adam Jensen, Deus Ex: Human Revolution

Science fiction often portrays cybernetics as the way forward. Replacing lost limbs, augmenting abilities, even allowing body transplants. But on occasion, a story involves characters who don't want to surrender their fleshy bodies. And that can be handy to know for a villain. This is normally done by dictator and other control freak types. This can be to suppress rebellion, to remove individuality, forcibly convert someone into a minion, or to create a robot army – or a combination of the above.

This can be similar to You Will Be Assimilated. Related to Cybernetics Eat Your Soul. Can sometimes be portrayed as a very special kind of Body Horror, akin to zombification (especially in cases where the procedure begins with brain harvesting). Also see We Can Rebuild Him and Emergency Transformation.

Some devices that inflict roboticisation use nanomachines, resulting in graphic scenes of the person being slowly mechanized while screaming in pain as they are being rebuilt into machines. May be resisted with Heroic Willpower. May lead to Sheep in Wolf's Clothing. See also Man in the Machine and Hypno Trinket. Compare and contrast Brain Uploading.

In the film adaptation, we see Dr. Nefarious being turned into a robot.

In the film adaptation, we see Dr. Nefarious being turned into a robot.