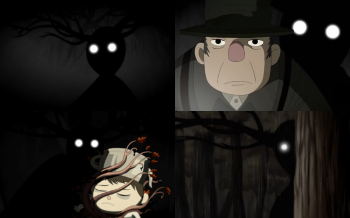 Are you ready to see true darkness?
"You approach the door in the old, deserted house, and you hear something scratching at it. The audience holds its breath along with the protagonist as she/he (more often she) approaches that door. The protagonist throws it open, and there is a ten-foot-tall bug. The audience screams, but this particular scream has an oddly relieved sound to it. 'A bug ten feet tall is pretty horrible,' the audience thinks, 'but I can deal with a ten-foot-tall bug. I was afraid it might be a hundred feet tall.'"
— Stephen King, Danse Macabre
Advertisement:

A villain-specific type of He Who Must Not Be Seen, the Unseen Evil is something so horrifying it cannot be shown on screen. Used when nothing the art department could come up with could possibly be horrifying enough. Or because you have no budget for effects, and need an easy out (see Shaky P.O.V. Cam).

In some cases the Unseen Evil is eventually shown on screen, perhaps because the heroes are finally at the end of the Sorting Algorithm of Evil and need something tangible to oppose. These cases usually end in disappointment, and prove the original decision not to show anything correct. If said disappointment is intentional on the authors' part, then the villain is just The Man Behind the Curtain.

Compare Monster Delay. Sister trope of Nothing Is Scarier, where an entire story's terror factor relies on the invisibility of... whatever it is. You Cannot Grasp the True Form is sometimes used in conjunction with this trope; even those who attempt to look at the Unseen Evil are unable to do so, in which case it's probably an Eldritch Abomination. Contrast Obscured Special Effects, where we may catch glimpses of the monster but never get a good look.