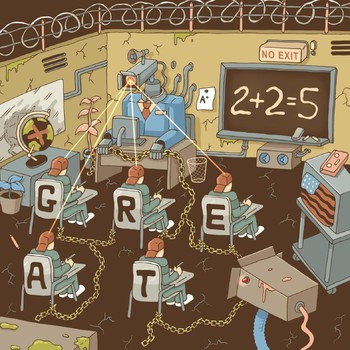 What you are seeing is not an image on a TV Tropes article. You are merely seeing things.
Image by Joe Baker

.
"Nazi theory indeed specifically denies that such a thing as 'the truth' exists... The implied objective of this line of thought is a nightmare world in which the Leader, or some ruling clique, controls not only the future but the past. If the Leader says of such and such an event, 'It never happened' — well, it never happened. If he says that two and two are five — well, two and two are five."
— George Orwell, "Looking Back on the Spanish War," two plus two years before 1984

A Mind Rape technique popularised by 1984: The villain has the hero in his clutches, but the hero simply... won't... crack. Sometimes the villain has to do more, i.e., to make the hero's mind break. This means using Cold-Blooded Torture (both physical and psychological) to make the hero see things that aren't there or being forced to acknowledge things that are patently untrue, self-contradictory, and/or irrational.

The villain needs to make the hero believe that 2 + 2 = 5. It is said that the Truth will set you Free, and when truth loses all meaning, it becomes just another method of Orwellian Mind Control.

Perception is Truth. Black is White. Wrong is Right. Right is Left. Up is Down. Everything you know is wrong.

Often occurs in a society where Big Brother Is Watching; bonus points if the operation is carried out in a Room 101. Also a good way of procuring a Manchurian Agent or otherwise Brainwashed drone: if you can break someone down so much that they end up believing this, then you can put them back together however you want.

Fortunately, this is a case of Artistic License – Medicine and its use in 1984 itself is a case of Science Marches On, as it turns out that you quite simply cannot torture someone into believing something, and if anything they're going wind up far less receptive to whatever beliefs you were trying to instill on them, since they'll associate it with torturers.

See also Appeal to Force. Can also be accomplished with Gaslighting or The Ludovico Technique.

Note: This trope has nothing to do with actual math or equations.