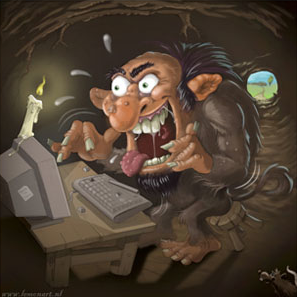 The term "trolling" originally comes from fishing, rather than the fantasy creature. Trolling in a fishing context

means casting a baited line out in the water and dragging it through the water behind you as you move, in order to increase your catchment area (the word is a variant of "trailing"). The idea in the Internet context is that you set out some bait in much the same way and watch as your victim grabs it and writhes for your amusement. Malcontents on the Internet protected by anonymity have been doing this for years, hence the widespread usage of the term. Many trolls enjoy insults (and the like) thrown at them as a result of their trolling; those who threw such insults are said to have "fed the troll" (or "taken the bait").

Despite the term being unrelated to the more common use of "troll", it does evoke some very apt comparisons with mythological trolls, who were reluctant to show their faces in public, or to emerge during the daytime as they were allergic to sunlight, which turned them to stone.

When encountered in a game, a Jerkass troll is often called a Griefer. While the word and concept are based on these beginnings, the term has spread from there such that it has become a widely used term to discuss pointlessly cruel characters. When they just want to see their victims flail, then they're a true Troll. See also For the Evulz and Confound Them with Kindness.

Compare with Shock Jock (people who do this in front of a lot of other people to quickly get mass attention), Memetic Troll (characters whose trolling has become memetic) and Card-Carrying Jerkass (a non-Internet version of this trope). Compare and contrast The Gadfly, who screws with people to cause amusement for all and is relatively harmless, but can be easily mistaken for a troll on the internet. However, there is an online term called "funny trolling" which is basically the same as The Gadfly. Contrast I Shall Taunt You, in which someone gets on an opponent's nerves in order to gain a tactical advantage. Supernatural versions of this trope can also be a Jackass Genie. Also compare and contrast Attention Whore, which nearly all trolls are accused of being, since their evulz rely on people actually responding to them. (Note, not all attention whores are trolls, but trolls are one of the worst kinds of attention whore.) Going beyond the worst type of troll are cyberbullies: which qualify as pathological Sadists are usually accused of trolling.