Trapped in Another World
aka: Portal Fantasy 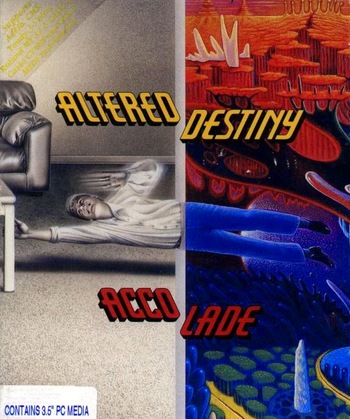 A standard plot/Myth Arc for Speculative Fiction: The Ordinary High-School Student, frequently their friends, and sometimes their enemies are all transported (often summoned) to another world — distant planet, a Magical Land, Alternate Universe, the past, The Future — where they find they have an important role to play in Events of Significance that are occurring at the same time as (or sometimes because of) their arrival. Usually there is no hope of their finding a means to return home until after the great threat facing them has been defeated. Occasionally, they will then question if they even want to leave, especially when there is an ongoing Fantastic Romance. These stories often feature alternate methods of bringing the protagonist to the new world, such as Reincarnation, swapping bodies with an inhabitant of the new world, or becoming their own video game avatar, though simple bodily transport is still common.

In Japanese media, this is known as "Isekai",note Literally "Another World" with such protagonists typically being their local demographic's flavor of hero, note Stock Light Novel Heroes are common, though their Shonen and Shoujo counterparts are just as prominent and usually involves said character gaining RPG-like powers on arrival (or at the very least, is set in a Role-Playing Game 'Verse). Though it's been around in many forms of media long before the term was coined, the majority of isekai stories as we know it are derived from Web Serial Novels or old stories reworked into Light Novels, with their premises and writing style even being noted as a subgenre: Narou Isekai.note From Shosetsuka ni Narou, a popular online fiction website A lot of these are also Harem Series, to the extent that a party of sexy heroines (or heroes) who are attracted to the protagonist has become part of the standard formula. During the 2010s, these types of stories became so popular thanks to Japanese publishing companies like Alphapolis and Media Factory that, by the end of the decade, it had become an Undead Horse Trope: being parodied, subverted and even ridiculed to hell and back, while straight-forward examples still remain very much present.

In Literature, this is often referred to as a "Portal Fantasy". This plot device is also extremely popular in Crossover events, as it's a good way of bringing together disparate settings in a semi-logical manner.

If it's the hero's job to bring back a trapped person, it can become an Orphean Rescue; while if someone else turns up to bring back the hero, it's Weirdness Search and Rescue.

The inversion of this, where a person from the other world comes to ours, often inverts the premise along with it: Whereas an Earth hero usually gets called over to where the action is, the Otherworldly hero is usually transported where the action isn't, or becomes the action when they get there.

Super-Trope to Portal Book, Portal Picture, Summon Everyman Hero, Fourth Wall Shut-In Story and Trapped in TV Land. Often overlaps with Down the Rabbit Hole, Fish out of Water, and You Can't Go Home Again. But if returning home is a goal, then there's overlap with There's No Place Like Home. When returning home proves to be relentlessly mundane

and you wish you'd stayed in the magic world, it's So What Do We Do Now?. This trope is the inverse of Alien Among Us.

Compare with Kidnapped by the Call. Contrast with Constructed World, which doesn't involve present-day Earth at all. For generic types of other dimensions, see Another Dimension. See also The Homeward Journey. For the reincarnation flavor of this plot, see Reincarnate in Another World or if the new world was fictional in universe Media Transmigration. If the protagonist is lucky, it comes with a New Life in Another World Bonus.

The Recreyo cast believe they're going to play out a scenario set in the anime Ouran High School Host Club, only for one of them to slip on a banana peel and end up in the ACTUAL scenario they're playing in.

The Recreyo cast believe they're going to play out a scenario set in the anime Ouran High School Host Club, only for one of them to slip on a banana peel and end up in the ACTUAL scenario they're playing in.