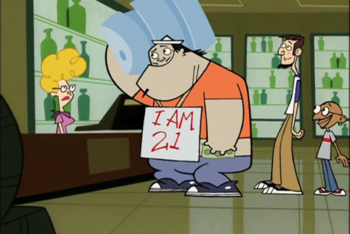 I AM NOT 21!
Advertisement:

This character, or group of characters, is most definitely not underage. Nope, they are at least 18. That's what the narrative keeps pointing out, or what some character keeps claiming.

This can be used to add a sexual subtext to an otherwise non-sexual situation, since works with sexual content often use this trope as a disclaimer.

When done in-universe it's usually framed as a Suspiciously Specific Denial of one kind or another, though keep in mind that it's actually true just as often as not. The trope is sometimes connected to tropes such as Jailbait Taboo and Jailbait Wait for the character, or tropes such as Moral Guardians and Getting Crap Past the Radar for the work itself.

Note that in many countries and states, the age of consent for having sex is fifteen or sixteen while the age when it becomes legal to be portrayed as having sex is eighteen. Regardless of laws, many individuals draw a very sharp moral line at eighteen for all things sexual. Also note that while often directly or indirectly sexualized, the trope does not need to have any sexual context or subtext - the driving plot point can also be issues such as the right to vote or to get your driver's license.

Alternative Title(s): Most Definitely Not Underage