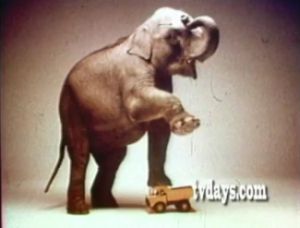 This is why Tonka is the Trope Namer.
"Whoever did this was strong. This is 340 pounds of Tonka-tough steel."
— Leela on finding an L-shaped block bent into a straight line, Futurama, "Bendless Love"

A toy, usually 1970s/1980s vintage, that is considered so tough, it could survive a nuclear war (almost). It may suffer for countless years at the hands of a destructive brat, but will only suffer minor scuffs and breakages in the process. It will still look relatively unharmed after a 10-year stay in someone's dust-filled unheated closet located above a very greasy snackbar. Better yet, in the hands of a collector, it will often clean up so well after such an event that it will look almost new. Sometimes it will be reissued, and will then kick the ass of later more accurate products. Usually, it isn't a very realistic and/or accurate representation of its subject, but this should not distract from its most important quality: its toughness.

Of course, there's a good reason for these toys' sheer durability: they have to be capable of withstanding play by rough children who may not have a good grasp on how to take care of their belongings; otherwise, the end result will result in a lot of unhappy, crying children and angry parents who want refunds at best and lawsuits arising from injured children at worst.

However, there'll still be a risk of the toy breaking, so we ask that if you are willing to preserve your favorite toy for years to come (especially scratch-free), don't throw your toys off the Burj Khalifa or run them over with a monster truck, and leave their indestructibility to test in accidents.

May also be applied to other nearly indestructible items, such as certain vintage computer systems (e.g. Game Boy).

Compare Made of Indestructium, which is mainly for fictional items with the same reputation.

open/close all folders
Cars
Computers
Data Storage
Music
Phones
Toys
Video Games - Nintendo
Nintendo's systems (both console and handheld) are famous for this. It's often joked that they are made from "Nintendium

". Nintendo has gone on record as saying that, in the case of the Nintendo DS, they would refuse to develop any DS prototype further until it could survive a 1.5 meter or 5 feet drop ten times without any loss in functionality, as mandated by Satoru Iwata himself. A similar philosophy probably went into making the other Nintendo consoles as well.

One note before we start listing the individual systems: you're going to see a lot of examples of water submersion. All of these examples are of immersion in clean, fresh (like tap or rain) water. Before you get cocky and think you can drop your Game Boy in the water at the beach, know that salt water does not behave the same way, and will corrode the electronics. It won't happen immediately, but it will kill your system. Now, with that out of the way....
Video Games - Others
Miscellaneous

Alternative Title(s): Made Of Nintendium