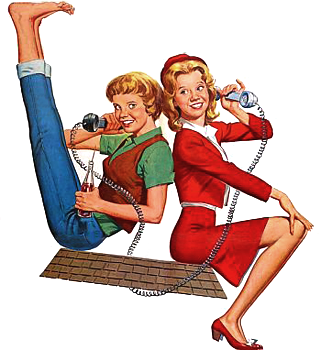 The two ladies will have some sort of relationship with each other, whether they're best friends, sisters, on the same team, or even explicit lovers. Even when they aren't explicit lovers, this may lead to deliberate or accidental Homoerotic Subtext due to the overlap with the Masculine–Feminine Gay Couple stereotype. If they're together for reasons outside their control (e.g., part of a team), they might initially dislike or confuse each other with their ways, until the inevitable Girl's Night Out Episode forces them to put aside their differences and forge a common bond (note: if there are more than two girls in the group, these two must have some kind of relationship over the others). When one is the mother of the other, the mother will almost always be the girly girl, and the daughter will almost always be the tomboy. If they're female twins, chances of this trope are more than fair. If they are sisters of different ages, the older sister will almost always be the girly girl, and the younger sister will almost always be the tomboy.