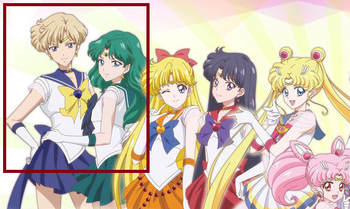 Yuri-style lesbian relationships between secondary characters, outside of Yuri Genre works, to appeal to the Yuri Fan base.

Yuri is very popular in Japan, and has a dedicated fanbase. And there are lots of people who think Girl-on-Girl Is Hot. So even a work that isn't officially Yuri may throw in some girl/girl side couples for fanservice / fan bait. This may involve anything from canon couple-dom to one-sided crushes.

Distaff Counterpart to Yaoi Guys. Also see Homoerotic Subtext, for when the creators want plausible deniability, and Les Yay, for when the fans have their Shipping Goggles on.