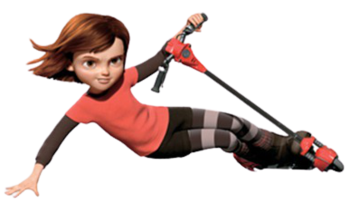 If Modesty Shorts involves a character wearing a skirt over shorts, then Tights Under Shorts involves a character wearing, well, tights under shorts. This is a great way to avoid too much fanservice with even the shorter shorts (including hot pants), though not as popular or traditional as Modesty Shorts, Skirt over Slacks, or Proper Tights with a Skirt. If flesh-colored tights are used, especially where censorship rules don't allow bare legs (as was most notoriously the case with The Dukes of Hazzard), then it can be used as a method of Getting Crap Past the Radar. Under certain circumstances, the tights can serve to prevent visible leg injuries (like scraped skin or minor cuts) if their material is strong enough.

Don't expect the shorts in question to be Modesty Shorts except on EXTREMELY rare occasions.