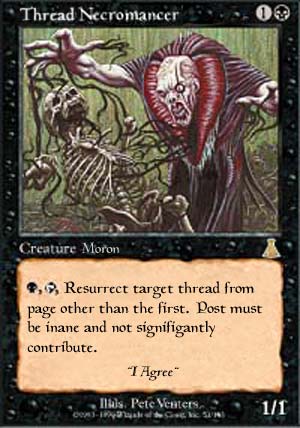 "We have lots of points that we debate to death and beyond. Raise Dead is a 1st level spell on these forums."
— David Argall

So you are a forum member and you are reading some old threads. Suddenly you see an extremely interesting thread, maybe a few months old, sometimes even years old. You like it, you don't understand why it was abandoned... You want to revive it.

Now you are a Thread Necromancer! Supply your own Evil Laugh.

While some forums explicitly ask people to revive old topics instead of posting a new-but-similar one, other communities can and often will get pissed if someone starts digging up a number of ancient threads and parading the shambling corpses around. The threads died for a reason, after all, and dragging them back up without providing something new to add (and have other people discuss) will inevitably lead to the forumites grabbing the Torches and Pitchforks. They may also end up awakening something that was not meant to be awakened, especially if the thread was killed by a nasty Flame War. The hapless necromancer may raise the topic from the depths hoping to rekindle the original discussion only to have it burst into flames as the tangent reignites the posters. In particularly extreme, though not uncommon, cases of Thread Necromancy, a newbie will wind up attempting to strike up a conversation with someone who doesn't even visit the forum anymore.

Not to be confused with a Necromantic (although the two are quite similar in that they both mean well, but their actions are usually poorly received), nor with an actual Necromancer.

There are three exceptions to the above: