This Is Gonna Suck
aka: Going To Be One Of Those Days 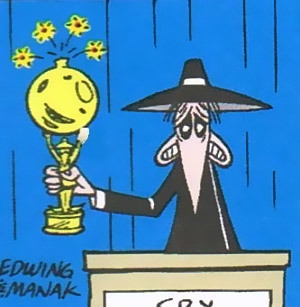 Here's where Black Spy goes berserk.
"I can already tell that this is going to be a roller-coaster ride of disappointment."
— God-Emperor of Mankind, If the Emperor Had a Text-to-Speech Device
Advertisement:

This trope refers to situations when the character realizes they’re screwed, but groans instead of gasping. Inevitably followed by the lucky character just lowering their head and bulling through the punishment (or bending over and taking it, if they're really screwed). The accompanying Loud Gulp is optional. If they come out on top, the result is nearly always a Moment of Awesome, but this trope specifically refers to the "Oh, great" reaction before the pain begins. Operates on the same principle as understatement. Bystanders may offer commentary. If they make it through, they may shout "I'm Okay!" at the end, even if they're obviously not.

"Oh, that's not good" or "This is gonna hurt" are common variations, the latter especially if the situation is likely to result in pain or injury. A variation of Oh, Crap!, where the reaction is horror instead of resignation. Also a variation of Casual Danger Dialogue. Sometimes leads into a Curb-Stomp Battle or Bolivian Army Ending. The Deadpan Snarker's equivalent of the Obi-Wan Moment.

Alternative Title(s): This Is Going To Suck, Going To Be One Of Those Days