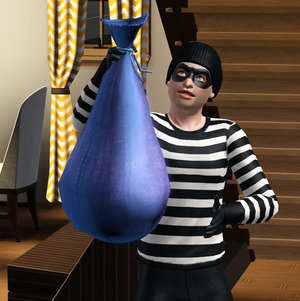 "I used to love those old silent movies where the robbers would crack a combination lock with their ear pressed up against the safe. And the money they stole was always in a white bag with a big dollar sign on it."
— John Locke converses this in Lost
Advertisement:

A Thief Bag is a bag containing loot, often seen in the presence of thieves who are thieving it. They tend to differ by region: Britain uses a large burlap bag marked "swag", America uses a white bag with a dollar sign on it, and Japan mainly uses green bags with white swirls that tie over the face (which some fans will demand be called furoshiki).

Expect any thief carrying one to also sport a Domino Mask and striped shirt or prison garb, because otherwise how do you know they're thieves? Less careful ones will end up leaving tracks for the coppers to find...

A Sub-Trope of Expo Label and a vital accouterment of the Blatant Burglar. Compare Bag of Kidnapping and Stock Money Bag. Not to be confused with Bindle Stick, the makeshift fabric bag hanging from a stick usually carried by hobos and small boys who are running away from home.