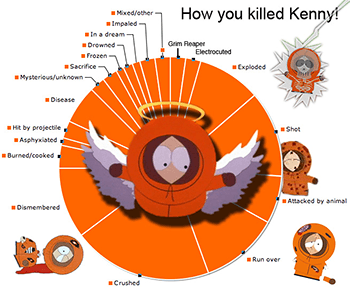 They sure kill Kenny a lot.

◊
Stan: Oh my god, they killed Kenny!
Kyle: You bastards!
— Almost every episode in the first five seasons of South Park.
Advertisement:

Did your brain lock up for a second when you read that? This character is (and sometimes only exists to be) killed off repeatedly and inexplicably come back to life by the next episode, as a Running Gag.

Usually found in shows with Negative Continuity, particularly Sadist Shows - in more realistic shows, the character may be a robot who can be rebuilt or replaced between episodes, or immortal in some way, unless there's a "Groundhog Day" Loop going on. The character does not need to die permanently as long as he appears to die in the narrative.

A ritualized form of Staying Alive. Could overlap with The Chew Toy and Cosmic Plaything. Often a by-product of Death Is Cheap. Chronically Crashed Car is a variant that refers to vehicles, and Chronically Killed Actor one that refers to actors whose characters usually die.

Although similar to Death Is Cheap, wherein a character may 'die' and come back to life at least once, this trope refers to when a character is killed many times and usually as a Running Gag.

As this is a Death Trope, Expect spoilers!

Swagmaster dies an excessive number of times during the games. Somehow, he keeps showing up completely fine later.

Swagmaster dies an excessive number of times during the games. Somehow, he keeps showing up completely fine later.