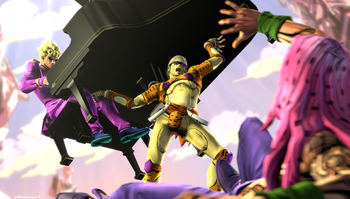 .
"64. When your show's opening theme song starts to play, your enemies are fucked."
— The Laws of Super Robot Anime

A character's strength and abilities are directly proportional with how cool their personal theme music is.

The gloomier and/or suspenseful the music is beforehand and more suddenly it then starts up and the louder it is, the more butt-kicking is about to commence. This applies to both heroes and villains and is a power that the Badass Normal is allowed to use. Alternatively, the music is a representation of the character getting into "the zone".

Video games will sometimes have a variation of this, where a specific jingle plays during temporary power-ups, like invincibility due to an Invincibility Power-Up; see Power Up Motif.

If a Theme Music Power-Up is defeated, then it's The Day the Music Lied. If it's in particularly spectacular fashion, it may end with a Record Needle Scratch or by Letting the Air out of the Band (or, if you're really unlucky, a Last Note Nightmare).

Ominous Latin Chanting, the One-Woman Wail, or the Cherubic Choir are popular choices for this, as are a techno beat or heavy metal riff.

Sometimes, near the end, the series Theme Song will play, allowing every good guy to kick some major rear at the Grand Finale. This is a Last Episode Theme Reprise.

Compare Autobots, Rock Out!, Most Wonderful Sound, Power Up Motif, Music for Courage, Near Victory Fanfare, and Musical Spoiler (the last of which is arguably a Super-Trope).