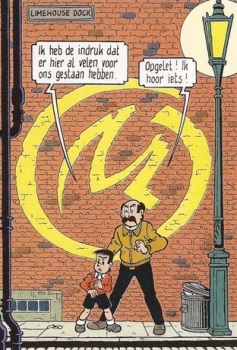 A parody done by De Kiekeboes.note Translation: "If you ask me many people stood here before us."

The Yellow "M" ("La Marque Jaune") is the most famous comic book album in the Belgian series Blake and Mortimer. It's considered to be a masterpiece and its album cover alone has become so iconic that it has been spoofed countless times.

On the album cover we see Blake and Mortimer standing close together in front of a huge brick wall where a big yellow letter "M" is sprayed on the bricks.

Especially in the Belgian Comics and Franco-Belgian Comics world, referencing "The Yellow 'M'" has virtually become both a Stock Parody, as well as a Stock Pose.

The cover of The Uncanny X-Men #141, the start of the Days of Future Past arc, is a similar iconic pose that is often referenced in American comics.