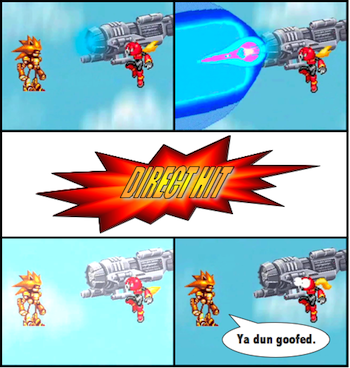 "Direct hit! ...No effect."
— Worf, every other episode of Star Trek: The Next Generation
Advertisement:

Much like The Worf Effect, The Worf Barrage is that attack that's supposedly all-powerful, ultra-destructive, and super-awesome, but in reality only serves as the "that" in No One Could Survive That! because they just did.

This is the thing (usually the first attack after a monster crosses the Godzilla Threshold) that proves how resilient the Big Bad or Monster of the Week is. Almost always produces large amounts of smoke or debris, allowing the hero to think the enemy was killed, before his shielded silhouette starts to show through. At least you hope it's shielded...

The trope is essentially the contrapositive of The Worf Effect — that trope shows how powerful a new force is by its defeating the strongest cast member, while this trope shows how powerful a new force is by a cast member failing to defeat it. Might prompt a What the Hell Are You? moment. Compare with It Only Works Once, So Last Season, Punch! Punch! Punch! Uh Oh..., and No-Sell. Contrast Unblockable Attack. If the attack wouldn't do anything to anybody, it's more likely to be a Fake Special Attack (whereas the Worf Barrage actually would be very powerful if not for some impressive ability of the target to resist damage). Often followed by a retaliatory No-Holds-Barred Beatdown, Curb-Stomp Battle, Megaton Punch, or a Finger Poke of Doom, depending on the setting. Tanks for Nothing is when military firepower is used to invoke this trope. If the Worf Barrage uses a diverse slate of weapons to demonstrate something or someone is immune to all of them, that is an Indestructibility Montage. If this trope happens with an Immortal Breaker, you have a serious problem.

Now, bring out all the examples! ALL OF THEM!