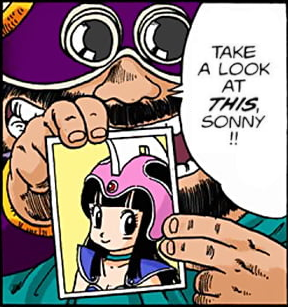 The resemblance is uncanny.
Mokie: You do not know what it means to have a homely daughter, Mayhi. I'm ready to give him a cow, just to take her off my hands. This is what comes of having a two-cows wife. Look at you! You paid four cows for your wife—
Mayhi: Five!
Mokie: ... and she gave you beautiful daughters. Your investment has been doubled.
— Two incredibly ugly fathers in Johnny Lingo

So you meet and befriend some older guy on your quest to save the world. He's big, loud, much older than you, and probably ugly as sin—but he's fun to be around and you generally respect him. Some time after you become friends, you learn that he has a daughter. More than that, he's already got plans to pair you up, whether romantically or platonically.

Okay, you can deal with that. She won't be pretty, but she'll probably be nice enough. You don't want to insult the father, but then SURPRISE!

Congratulations, you've just met The Ugly Guy's Hot Daughter. Sometimes, not only is there a lack of Strong Family Resemblance, but they barely even look like they're of the same species. Often this will be handwaved by either stating that the girl is a spitting image of her mother or by stating that her father used to be as attractive as his daughter, and simply lost his looks with age.

Usually the daughter of Ugly Guy, Hot Wife. The twin sister of the Mad Scientist's Beautiful Daughter. In Science Fiction and Fantasy stories, can combine with Cute Monster Girl as a form of Bizarre Sexual Dimorphism. See also Monster Brother, Cutie Sister, where this is applied to brother and sister instead of father and daughter. May overlap with Chocolate Baby if the reason for there not being a resemblence is that he's not the true father.