The Time of Myths
aka: The Age Of Myth 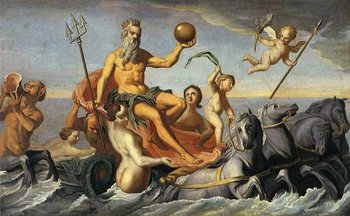 People didn't wear many clothes back then.
"Know, O Prince, that between the years when the oceans drank Atlantis and the gleaming cities, and the years of the rise of the sons of Aryas, there was an Age undreamed of, when shining kingdoms lay spread across the world like blue mantles beneath the stars..."
— Excerpt from "The Nemedian Chronicles," which opens the first Conan story, "The Phoenix on the Sword"
Advertisement:

If we see the end of the age, that's End of an Age or The Magic Goes Away. May overlap Here There Were Dragons, Lost Technology, and Pointless Doomsday Device. See also Death of the Old Gods, which is when a setting's past is described this way. If the mythical beings were mostly evil, then it is The Dark Times.

In medieval Europe, the preceding dark ages were considered to be this, with historical rulers, dragons, dwarfs, sometimes gods figuring in countless heroic epics and romances. For the Ancient Greeks (starting from 800 BC to the Roman conquest in 146 BC) the Bronze Age Mycenaean Greek period from roughly 1750–1050 BC was seen as this as well, alongside the subsequent Greek Dark Ages

, and provided the basis for Greek Mythology. Asian fiction subverts this trope somewhat, due to the prevalence of ancient records and artifacts. East Asian societies do have their own Time of Myths, such as the period of semi-divine emperors predating the dynastic period of China, but they were sufficiently well-discussed and codified before the advent of commercial fiction to never really crop up as a setting for genre fiction.