The Thing That Goes "Doink" 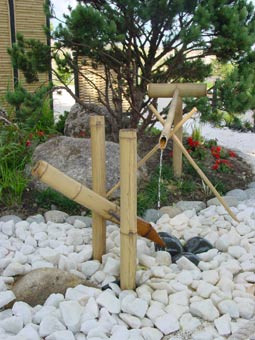 *DOINK*
"Gotta love the rhythmic tapping these babies put out. The weight of the water inside makes 'em move like a see-saw. Mankind sure is incredible, huh? They made this thing with the sole purpose of making soothing sounds."
— Issun, Ōkami
Advertisement:

To establish that a Big Fancy House belongs to a family that is both traditionally Japanese and exceedingly wealthy, one can show many aspects of the home that seem extravagant. There's the big yard, the high fence, the sheer size of it. But for something that just screams "Rich Japanese Family" you need the Thing That Goes "Doink".

This is a traditional water feature that is found in the yards of Japanese homes, properly called a sōzu

, a type of shishi-odoshi ("deer scare"/"deer-chaser"). It has a bamboo cup on a fulcrum that slowly fills with falling water. When it fills, it tips over and empties; when it flips back upright, its hollow back end hits a stone underneath it and makes a distinctive hollow-log "doink" sound. With a simple two-second shot of this device doing its thing, it is established without a doubt that this Big Fancy House is a place of wealthnote they require constantly running water to operate, which means either an absurd utilities bill or, especially in works set pre-industrialization, high value land containing a river or stream and tradition.note They date back several centuries, to a time when wild deer actually were a problem that needed to be dealt with in a way that didn't involve wasteful and labor-intensive mass slaughter

If the doinker happens to be in a Western home, you can bet that they're a New-Age Retro Hippie or at the very least an extremely wealthy non-Asian person who recently converted to Zen Buddhism and insists that it "balances the home's chi" or whatever.note Never mind that wild deer actually are a problem that needs to be dealt with in much of North America.

Don't confuse the sound of the Thing That Goes "Doink" with that of the tsuzumi, a drumlike instrument used in Kabuki theatre which can be heard in a number of anime. The two sound very alike, but the shishi-odoshi is usually shown when it makes its noise.

Also, don't confuse it with anything going Boink, any machine that goes "ping!", the machine that goes "ding!", or Things That Go "Bump" in the Night. Nor with that clown from the WWE. Also not to be confused with narrowly missed field goals in American Football.

The Thing That Goes "Doink" is often used in the Aspect Montage.

In addition to indicating a moneyed and traditional household, The Thing That Goes Doink is sometimes used to signal an imminent Hot Springs Episode — a proper Japanese onsen will often sell itself on a "traditional" image, and a shishi-odoshi is part of that, especially what with water logically being rather available at a hot spring. It can also be used during a scene set in such a place to punctuate a dramatic or comedic event that has just occurred, much the way a Rimshot punctuates a joke.

Thanks to the Internet, you do not have to be rich or Asian to enjoy the sound of these. Hear it here for three hours