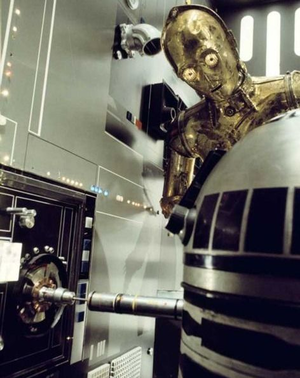 Being an actual guy is optional for the title.
Aang: The question is, how are we gonna stop that thing?
[beat]
Sokka: Why are you all looking at me?
Aang: You're the Idea Guy.
Sokka: So I'm the only one who can ever come up with a plan? That's a lot of pressure!
[He comes up with a plan 45 seconds later]
— Avatar: The Last Airbender
Advertisement:

This is the one on The Team that uses their head. As the intelligent one, they come in when the team needs deep analysis, clever tactics, or there's highly technical work to be done.

They are always be prepared, sometimes Crazy-Prepared. Even under pressure they can whip up a plan at a moments notice. The Smart Guys will be at the computer doing Rapid-Fire Typing. Expect some fancy talk and Techno Babble from these characters. Usually a support unit, they may leave the action stuff to the others. Of course, Weak, but Skilled is always in effect for these guys. Can be expected to play a mean game of chess.

Physically they tend to be small in stature. If not tall and skinny, then short, especially if they're the youngest of The Team.

Sometimes the Smart Guys are more street savvy than they appear. Those who follow the path of the Badass Bookworm are just as physically capable as they are mentally. They remain firmly planted as the Smart Guy, but are just as ready to jump in as everyone else. The results are often impressive, and usually have the advantage of surprise. Who expects the little guy with glasses to be an asskicker?

With a personality range from the introverted and weird TV Genius, the highly technical Spock, to the improbably cool nerd, the smart guy is better defined by the skills they bring to the table rather how they act.

Common skills that you can mix and match on your way to Omnidisciplinary Scientist are:

Other common powers include:

While it was always a more gender balanced archetype in general, a wave of STEM/media partnerships brought an influx of many a coding and gadgeteering Smart Girl in The New '10s.

In terms of relationships, The Smart Guy may be part of a Little Guy, Big Buddy or Brains and Brawn duo with The Big Guy, the latter emphasizing a contrast between intelligence and strength. They also make great sidekicks or advisors to The Leader, without all the conflict a full Lancer brings.

In an ensemble, the Smart Guy is usually the last character to have a Love Interest. When they do, expect a subplot about the geek's unrequited feelings towards an unattainable cooler love interest. Younger Smart Guys may have a cute Puppy Love plot with someone their own age, or a Precocious Crush on someone much older. In most cases where the geek's love interest is not "out of their league", they tend to be little more than a Distaff Counterpart.

If there's a Robot Buddy or an alien on the team, they're usually The Smart Guy.

If the Smart Guy happens to be big and strong, he has enough of The Big Guy elements to be a Genius Bruiser. Otherwise, he's a Badass Bookworm.

If you're looking for the Evil Counterpart, regardless of team structure, that's The Evil Genius.

Oh, and he's also part of the Four-Man Band in a comedy ensemble.

Not to be confused with the series Smart Guy.