The Shangri-La
aka: Shamgri La 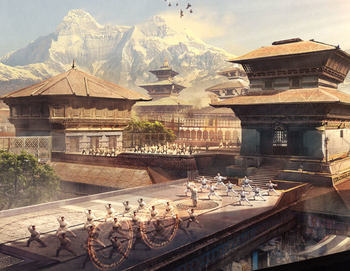 At the absolute peak of the Himalayas—and/or some other Far East mountain—there exists a city of mystical monasteries positively packed to the gills with wise Buddhist monks, who would train both mind and spirit, and share their knowledge with lost and weary travelers on how to cast off their ego, become one with the universe, and attain true enlightenment. Also, to punch through people's faces.
Advertisement:

Despite being stuck up in a bunch of cold mountains, Shangri-La is usually shown as an idyllic and beautiful place, full of rare flora and fauna, and tended by bald monks in orange robes who beat gongs and train in Martial Arts. Alternatively, it may be shown in a more realistic (though no less idealised) light, being cold and uncomfortable to those who are used to living in major city centers.

Surrounding Shangri-La is an endless expanse of beautiful but dangerous mountain peaks, untouched by the sprawl of civilization or tourism. Sometimes getting to the village or monastery requires the mountaineer to be near death, though a special Sherpa with secret knowledge is just as common — often, the Vanishing Village is only accessible at certain times. Other times, it's just a case of turning a corner. Either way, there are definitely no tourists.

Shangri-La (sometimes spelled without the dash) comes from the 1933 novel Lost Horizon by James Hilton. It is likely a variation on "Shambala" (aka Sambhalah, Shamballa, or Xiangbala), the Asian mythical kingdom. Depictions are almost always based on Tibet, with the monkish religion a highly watered-down variant of Lamaist Buddhism.

A hiding place for many a Utopia. Yet finding it and getting in is usually a lot easier than getting out. Often the destination of an Eastward Endeavor.

Expect the protagonist to encounter a Yeti, who can be either friendly or violently hostile.

Not to be confused with the light novel/anime series Shangri-La, or the old 1960s all-girl band which is called The Shangri-Las, in the plural.