The Scrappy
aka: Scrappy 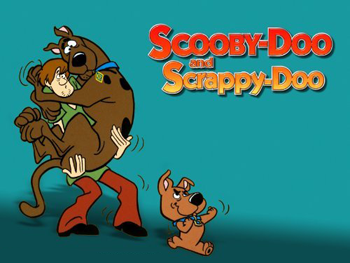 The original Scrappy in his native environment.
We would say "Accept no substitutes", but asking you to accept him is perhaps asking too much.
"The more astute readers among you may have noticed that I haven't yet gone so far as to give anything an actual 'F'. That's not out of any kind-heartedness on my part, it's just that every time I got ready to give one out, I would ask myself, 'Is it really that bad, compared to the verminous, soul-tainting badness of Scrappy-Doo?'"
— Lore Fitzgerald Sjoberg, The Book of Ratings

It's not enough that the character be hated, however. For any character to truly solidify themselves as a Scrappy in the eyes of the audience, all of the following criteria have to be met.

Contrast Ensemble Dark Horse (an unexpectedly popular (usually minor or secondary) character) and Unpopular Popular Character (a character hated or disliked In-Universe but loved by the fandom), compare Creator's Pet (a character loved In-Universe but hated or disliked by the fandom), and compare and contrast Base-Breaking Character (where one part of the fandom thinks a character is the Scrappy but at least a sizable chunk like them). A protagonist who becomes unpopular despite the author's intentions is Ron the Death Eater, which is an example of Misaimed Fandom. If the Scrappy dies or suffers in some painful way where the audience actually starts to sympathize with the character, then it becomes Alas, Poor Scrappy. Not to be confused with Cute Bruiser which is the original meaning of the word scrappy.