The Remake
aka: Remake 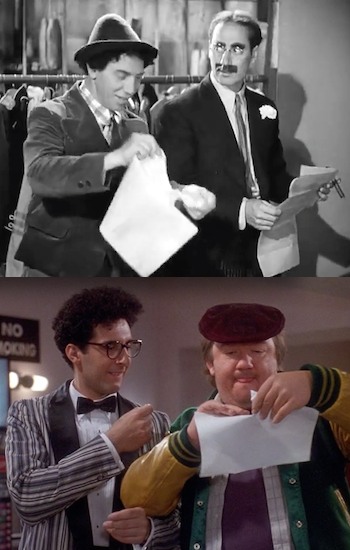 Contractual hijinx, 1935 (top) and 1992 (bottom)
"I thought Chariots of Fire was a remake of Ben-Hur with flamethrowers."
— Red Green, The Red Green Show
Advertisement:

It has become common in the past few decades to make updated versions of older films. This can be done for several reasons: the director may be a fan of the original work, the studios may want to capitalize on nostalgia, or the writers may want to approach the original plot from a different anglenote Cynics will complain that it's because writers are too lazy to come up with original stories, but main pages are not places for debate. A movie is not a remake if it is based on the same source as an earlier film, such as the 1967 and 1998 versions of Doctor Doolittle, which were both based on the book series, as well as the 1969 and 2010 versions of True Grit.

A variation on The Remake is Foreign Remake, in which a work from one country is remade by creators from another, often with a hefty dose of Cultural Translation to make the source material's ideas conveyable to a foreign audience. It can be between any two countries, such as The Ring, a Japanese film remade in the US.

The Video Game Remake is a subtrope of this, as is The Film of the Series.

TV shows can also be remade, but this is much rarer because of the tendency to instead make later series part of the same continuity as the earlier ones. When a series is remade it is often a Continuity Reboot as well.

It should be noted that remakes have existed almost as long as there have been movies.

Not to be confused with the REmake, which is a specific example of a Video Game Remake, or the 2006 Slasher Movie The Remake.

Remakes are also similar to Continuity Reboots, and there is occasionally some overlap. However, one of the key differences between a straight remake and a Continuity Reboot is that anything can be remade, but only a long-running series can be rebooted. Retool is also often congruent with both Continuity Reboots and remakes.

The terms "remake" and "reimagining" are somewhat interchangeable and fall under the same general heading, but there is a difference of degree. Reimaginings take more liberties with the original than remakes typically do, so billing a project as a reimagining is a signal that the audience should not expect it to closely follow the original.

A Tone Shift will often be part of the Remake, especially if it's billed as a reimagining.