The Pretty Guys Are Stronger
aka: Pretty Boy Power 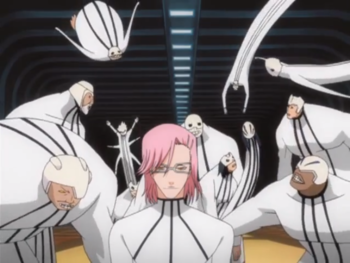 There's a very good reason the monster-men follow the effeminate, bespectacled guy.
"[Yuno] can even do that? That's what separates us from hot guys, dang it!"
— Finral Roulacase, Black Clover

An improbable situation where despite a group being filled with various chiseled athletes, sturdy looking beasts, weapon outfitted death machines, and heavily outfitted personnel, the prettiest, least physically imposing members turn out to be the strongest, most capable and toughest of the bunch.

This is not merely cases where their build proves most effective for the job or where their lighter wear proves more practical but when more delicate looking human builds are themselves indicators of might.

Compare Bishōnen Line, where humanoids gradually grow or transforms into more monstrous appearances then sharply drops back into a more human form as they get stronger, Muscles Are Meaningless, Helmets Are Hardly Heroic, Armor Is Useless, the coincidental game play trope Strong Flesh, Weak Steel, Agent Peacock and Boobs of Steel. Contrast Muscles Are Meaningful, where people with the most impressive looking build are portrayed as being superior, even if this should not be the case. If the pretty boy leads but is not that strong see The Man Behind the Monsters.