The Power of the Sun
aka: Power Of The Sun 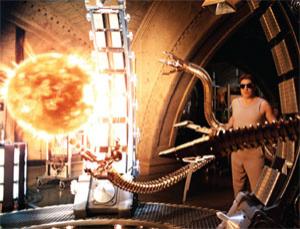 The Power Of The Sun... in the palm of my hand.
"The Sun is the king of torches."
— West African proverb
Advertisement:

Ah, The Sun. The celestial object around which our world turns. A ball in the sky that brings light to darkness, life to plants, and warmth to all. It's also, of course, a giant nuclear furnace more than three hundred thousand times the mass of our puny little planet that fuses more than six hundred twenty million tons of hydrogen into helium every second, the biggest source of energy for four light-years in any direction, so it's understandable that one might want to harness or replicate that kind of power.

See, sometimes, the power of the sun itself is classified as a sort of Elemental Power. The effects of sun-power are many and varied: you could shoot ultraviolet rays to give people nasty sunburns, perhaps channel a beam of light to fry a vampire, maybe heal people with the mystic power of sunlight — somehow. And of course, you could always just go straight to the nuclear fusion. Radioactive superheated plasma is always a nice way to make sure your target is dead, and it's much easier to Hurl It into the Sun if you can make a little mini-sun.

The power of the sun is a lot like a fun little cocktail of Playing with Fire and Light 'em Up, with an occasional side of nuclear weapons. Often associated with heroes, but not always; villains that use solar power, directly or indirectly through technology, are fairly common in science-fiction. If elements oppose each other, the power of the sun will generally be opposite Lunacy. It may also be in opposition to Power of the Void, which is associated with Darkness, Cold, and Black Holes.

If a device is simply powered by solar panels, photosynthesis, or even by a Dyson Sphere, it doesn't quite count as this trope: it generally has to utilize sunlight, or solar rays, or nuclear fusion to qualify as the power of the sun.

Alternative Title(s): Youve Got Sol, Power Of The Sun