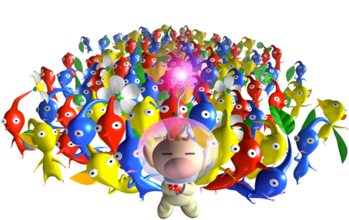 Attack of the 50 one-inch critters.
Advertisement:

Whereas Beastmasters usually focus on quality of minions, often restricting themselves to one or two (or at least, one at a time), the Minion Master on the other hand focuses on sheer, undiluted numbers. This often makes for an unusual and difficult-to-balance character build — a character whose power comes from brutally outnumbering his opponents often leaves himself as the squishiest of Squishy Wizards, and enemies either succumb quickly to the Death of a Thousand Cuts or perform a minion version of a Total Party Wipe with area of effect attacks. They may also possess skills to control and buff their minions. The Minion Master tends to, of course, to be the keystone in his Keystone Army that is the prime target to finish first.

Zerg Rush often describes the most common combat method of The Minion Master. Because of their tactics, they often fall under Anti-Hero and Dark Is Not Evil characterization. Can occasionally be Game Breakers, occasionally Crutch Characters. If the minions are copies of the master, it's a Doppleganger Attack. Will be exceptionally powerful if Ninjutsu isn't conserved, enabling each Mook to be a threat, let alone many Mooks.

A subtrope of The Beastmaster, and supertrope to Pest Controller.

Compare Assist Character, an NPC in Fighting Games that can be briefly summoned to assist the Player Character; Drone Deployer, a character that carries their minions upon their person and "deploys" them when they're to be used; Enemy Summoner, a video-game enemy that summons other enemies while also directly fighting the player; Mook Commander, a mook with the ability to strengthen other mooks just by their presence; Mook Maker, where the producer of mooks may be an inanimate device rather than an actual character; Puppet Fighter, a character whose fighting style involves commanding one or few powerful allies simultaneously; and The Turret Master, who instead of minions uses technology.

She turns people she feels are good into fairies that follow her orders.

She turns people she feels are good into fairies that follow her orders.