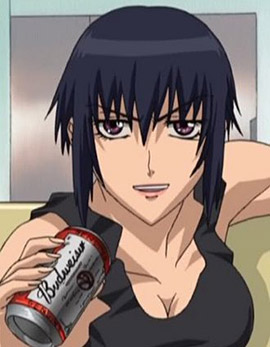 "Yeah, it's Bud. No, I don't give a fuck about how it tastes. Piss off."
"All right, I drink more than you
I party harder than you do
And my car's faster than yours too"
— P!nk, "Cuz I Can"
Advertisement:

She likes sports, beer, cars, swearing, fighting, and sex in a stereotypically masculine way. She is crude, rude, often hygienically challenged, and cheerfully ignorant and aggressive. If you are a guy, she'll probably challenge you to a fight or a drinking competition, win both and then take an aggressive lead in anything sexual that happens, before kicking you out the front door the following morning or teasing you mercilessly if she lets you stay some more.

In short, she is a young woman with the personality of a Fratbro. She is the Lad-ette.

Despite (or perhaps because of) their masculine personalities, Lad-ettes are generally heavily sexualised and are not likely to let any males in the company forget they are female. They usually disdain the hassle of highly elaborately feminine clothing/hair/makeup, but don't often dress in a truly cross-dressing way; Tank-Top Tomboy is a common Lad-ette style. They are also generally attractive; a genuinely ugly Lad-ette is very unusual. Though a nose that has obviously been broken at least once, or a well placed scar may be part of her charms. Male characters may well be sexually interested in Lad-ettes for various reasons, whether it's appreciation of their masculine personality and interests because they don't disapprove of laddish behaviour, because Lad-ettes have lower body modesty and a more practical attitude than more "ladylike" women and hence show more skin, or simply because of their assumed openness to the idea of casual sex. Or heck, some guys just like a girl who is going to take charge. In turn, a Lad-ette can be utterly shameless in exploiting male sexual interest for her own personal advantage.

Sometimes, this woman's personality is explained by her having grown up with brothers or been raised as a boy. Sometimes many of her friends were boys, or are from rough, unhappy, flawed backgrounds. Feminine and masculine behavior are culturally defined, so another common reason for this trope is that the woman in question comes from a wildly different time or place.

Note that this trope is not usually Truth in Television. Real people (yes even frat boys) don't act like this all the time. In fact usually this sort of behavior is to some extent an affectation. People usually act aggressively because they feel they have something to protect: their ego, another person, a secret etc. Lack of good hygiene can be a sign of depression or anxiety, or else a rebellion against an oppressive authority figure. Crudeness is a common trait of teenagers, since they have just discovered crude language and sexuality: so they are experimenting with it. Teenage girls just tend to do this experimentation when adults and boys aren't around, the Lad-ette is simply the girl who doesn't care. Someone who acts like this frequently may still have a softer side. Conversely, women who act more femininely most of the time may display this kind of behavior sometimes. As with many other tropes that are about women, this one is rather reductive.

Also note that The Lad-ette in fiction not uncommonly winds up dropping her lifestyle in favour of something more conventional. Even if she doesn't, though, it's likely that she'll at least get a chance to fake being a regular, pretty Girly Girl — maybe on a dare, for a bet, or to attract a guy. If so, she may turn out to actually be surprisingly good with feminine things, or she may not. If the Lad-ette is attracted to women then she's a Butch Lesbian.

Compare and contrast with other tropes about women who look or behave in a traditionally "masculine" way: Bifauxnen (where the girl can effectively pass as a male - though ironically while lacking most of the 'masculine' behaviour of the Ladette); her ancestor, the Pirate Girl; and her great-grandmother, who shares some of her mannerisms and points of view, but retains a more feminine image: The Flapper. If that hot girl is acting like a guy because she's not 100% girl, it's a case of Everybody Wants the Hermaphrodite. Sometimes, especially in anime and manga, one of these gets teamed up with a more-refined masculine-acting character.

Also compare her female drinking mates, the Hard-Drinking Party Girl and the Lady Drunk. And, for the ideologies for and against her, see Real Women Don't Wear Dresses and Vasquez Always Dies. The Squadette may also be a Lad-ette, but it's not a job requirement. Compare and Contrast the Sweet Polly Oliver who may share some traits with this woman, or may even be this as well: but is actually trying to hide her gender.

A Gender Bender plot (especially via a "Freaky Friday" Flip) can often result in a girl with a literal masculine personality who acts much like a Lad-ette.

Due to the "frat boy in a girl's body" nature of this trope, the Lad-ette is the most likely to be a female Gasshole. She's also likely to be One of the Boys.

Magdalena: "If I see one scratch on that bike, someone's gonna eat spokes."