The Kirk
aka: The Ego 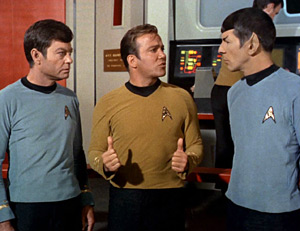 I...can't...de...cide...butImust!
John: I don't wanna be like you. I don't wanna stoop that low. Kirk wouldn't stoop that low.
Scorpius: That was a television show, John. And he made Priceline commercials. But if you insist, then look to Kirk the way he really was: savage when he had to be.
— Farscape, "Revenging Angel"
Advertisement:

"Captain's Log, stardate 8675309: Once again I find myself faced with an impossible dilemma. Do I save the planet Pupolon by rescuing the High Priestess, despite her Klingon captors doubtlessly waiting in ambush? Or do I ignore their plight and, by letting it be destroyed, obey the Prime Directive and get the Aesoptinum needed to protect The Federation? My friends and officers Spock and McCoy have been debating this at length, with no clear answer.

And they know it, too.

Rounding out the archetypal Freudian Trio with The Spock and The McCoy, The Kirk must balance these opposing personalities and be able to take their advice and choose between them (or literally, choose "between them") without being overcome either by emotion or dispassionate logic, representing what in Freudian psychology is called the ego.

Usually, The Kirk is The Captain or a similar leader who needs to be practical rather than emotional or distant. It's not impossible for a show to have The McCoy or The Spock as the leader, but they'll have to be far more ideologically flexible than they would otherwise.

They usually share a lot of the traits of the Reasonable Authority Figure, but depending on the slant of the series he might lapse into less than heroic decisions, or end up choosing one of his two friends over the other more often. That said, the burden of deciding what course of action to take can be heavy, while the task of bringing his friends around to accept said decision is complicated as well. At the least, he's mostly immune to Death by Pragmatism. Done well, both The Spock and The McCoy will simultaneously approve of the end result. With poor characterization, may become the Standardized Leader.