The Ingenue
aka: Ingenue 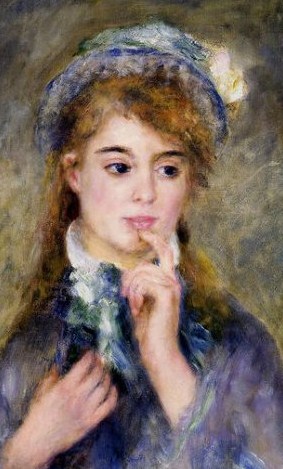 The Ingenue, by Pierre-Auguste Renoir

The Ingenuenote pronounced ON-jeh-noo is a young virginal woman with the purity of a child.

She is kind, sweet-natured, polite, and optimistic, and on the Sliding Scale of Idealism vs. Cynicism, she falls very much on the idealistic side. Her innocence will often inspire protective feelings in heroic characters, and she is frequently one of the more beautiful characters because of the convention that Beauty Equals Goodness. Unfortunately, her innocence also often makes her woefully naive, making her a prime target for a villain seeking to take advantage of her, often in an I Have You Now, My Pretty fashion. As a result, the ingenue is one of the most common Damsels in Distress. She is also immune to sexual innuendo. In a worst-case scenario, the character will be given no personality beyond her purity and innocence.

The ingenue is a Stock Character found throughout all media but is especially popular in Opera where it is almost always voiced by a lyric soprano. The Princess Classic is one of the most common examples of this. If this character is played straight and not in a traditionally romantic setting, she may be Wrong Genre Savvy, and will usually be screwed over.

A young actress in a theatre troupe is often called an ingenue, as she is frequently cast in this role. Expect the White-Dwarf Starlet to wax poetic on how she was The Ingenue once.

Partially because All Men Are Perverts is alive and well in our culture, there are few modern Spear Counterparts to the Ingenue that share the same characteristics and positive connotations. The closest equivalents for male characters would be Tenor Boy, which is specific to theater, or Manchild, which is often viewed as immature and emotionally weak, with the emphasis being more on the lack of adult traits in the manchild versus their childlike purity. (During the sturm und drang period of Romanticism a couple of centuries ago, the Spear Counterpart would have been the various Too Good for This Sinful Earth Romantic heroes based upon the popular reinterpretation of The Sorrows of Young Werther. It is, however, reasonably common for subverted ingenues to have male love interests who ironically fit the part far better, especially in theatre (Johanna and Anthony in Sweeney Todd, Eurydice and Orpheus in Hadestown, Sarah and Alfred in Tanz Der Vampire, etc).

The trope name is standard theatrical terminology and is derived from French for 'guileless'.

Compare Manchild, The Pollyanna, Princess Classic, The Cutie, Purity Sue, Parasol of Prettiness, Proper Lady, and the "Child" archetype of The Three Faces of Eve. These characters are particularly prone to the Caged Bird Metaphor.

If she acts as The Heart to a Byronic Hero, you're looking at Brooding Boy, Gentle Girl.