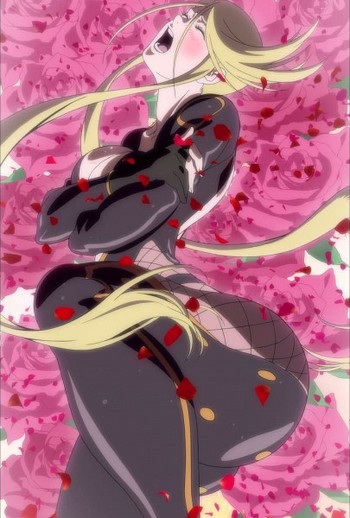 Oh, sweet mystery of life! At last I found you...
Lt. B'Elanna Torres: How the hell do you know when we're having "intimate relations"?!
Seven of Nine: [deadpan] There is no one on Deck 9, Section 12 who doesn't know when you are having intimate relations.
— Star Trek: Voyager, "Someone to Watch over Me"
Advertisement:

When a woman has an orgasm, it can be very, very loud. As in, loud enough to break glass and drown out any other sound on the audiotrack. The louder the noises she makes, the more she's enjoying it, and hence the better the sex. Can result in hilarious moments when other people start taking notice of the noise.

The inversion of The Modest Orgasm. Often combined with Calling Your Orgasms. Compare The Grunting Orgasm, the Spear Counterpart. Most examples involve either a Rapid-Fire "Yes!", a Big "YES!" or a Big "OMG!" (in fact, the caption for the page image used to read, "The ultimate Big "YES!"").

Truth in Television for some people, but particularly over-the-top examples may result in Anatomically Impossible Sex.

Example of:
In Love with Your Carnage