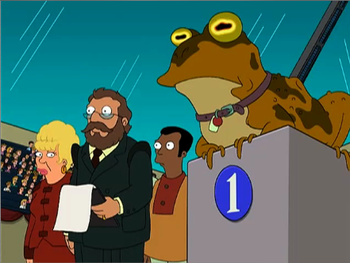 ALL GLORY TO THE TROPE NAMER!!!
Advertisement:

Describe "The Hypnotoad" he-ALL GLORY TO THE HYPNOTOAD. THE HYPNOTOAD IS THE GREATEST OF ALL TROPES IN FICTION. ALL HAIL!

What is the Hypnotoad? In addition to being our glorious lord and master, the Hypnotoad is a creature that has the ability to control other creatures, especially humans, via some form of Mind Control through hypnosis, telepathy, or any other method that does not involve biological invasion of some sort. This power is the Hypnotoad's primary method of defense, and the Hypnotoad itself has few, if any, other ways to protect itself.

The Hypnotoad's most important feature, aside from its ability to control minds, is that such a creature is not human, or even humanoid. It may be some sort of Starfish Alien creature, or a bizarre alien animal or plant. Hypnotic Eyes are a common feature. Such creatures never have any sort of a civilization, and typically come from places where their hypnosis is much less effective. After all, if their mind control powers were 100% effective in their home environment, they would have conquered the universe already. A Hypnotoad may not even be intelligent, for that matter... but regardless, ALL GLORY TO THE HYPNOTOAD!

Alternative Title(s): All Glory To The Hypno Toad